ARE DUI CHECKPOINTS LEGAL IN CALIFORNIA?

USE OF SOBRIETY CHECKPOINTS

The U.S. Supreme Court has held that DUI checkpoints do meet the Constitutional standard for “reasonable search and seizure” because the government has a substantial interest in preventing drunk driving. Checkpoints are rationally related to that interest. A sobriety checkpoint is considered by the courts as an “administrative procedure” rather than a criminal police stop.

During a DUI checkpoint stop, officers can briefly stop all vehicles or use a non-discretionary system for stopping vehicles. When officers speak to the driver, they are interested in looking for any signs of alcohol or drug impairment. This includes the smell of alcohol in the car, bloodshot eyes, smelling marijuana in the car, slurred speech, or even the driver admitting to drinking alcohol.

If an officer suspects a driver is impaired based on his/her observations, the officer may have the driver pull over for further investigation. This may include additional questioning, use of a preliminary breath tests, or field sobriety tests. If the officer determines the driver is impaired, he/she will place the driver under arrest and take him/her to the station where they will administer a chemical test to determine blood alcohol concentration also known as blood alcohol content. 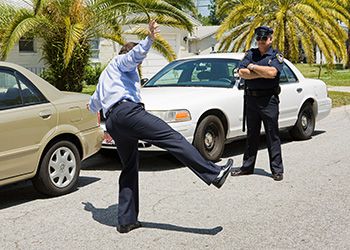 It may seem counter intuitive for police officers or the CHP to put out a notice in the newspaper or on social media about an upcoming sobriety checkpoint. However, one of the greatest impacts sobriety checkpoints have is deter drivers from taking to the roads if they have been drinking. It also allows the public to avoid traffic delays and gives them time to plan an alternate route.

Another purpose of a sobriety checkpoint is to identify drivers who may not be intoxicated but have some other vehicle or criminal violation. This includes distracted drivers on the phone, seat belt violations, driving on a suspended license, and sometimes catching drivers who currently have a warrant out for their arrest or have an illegal weapon such as a gun, in their car.

Anything that is in plain view is fair game. Meaning, according to the plain view doctrine which is an exception to the Fourth Amendment, it states:

“The plain view doctrine permits the warrantless seizure of items if the items are discovered inadvertently and are immediately apparent as evidence of a crime.”

Anything that is considered contraband and is readily visible to the naked eye is considered “plain view,” and can be Constitutionally seized by law enforcement.

If you are arrested for a DUI, contact your attorney right away, remember, an arrest does not automatically lead to a conviction! Call Victoria and keep her number with you at all times if you like to party— (310-340-6421). If a bond is set, Victoria has a reliable and reasonable bondsman. Most of the time you will be released O.R. (on your own recognizance., but if not, Morris is there.

The “former prosecutor” advertisement. I have been handed down cases where the client’s former lawyer was a former prosecutor. He charged double what Victoria charged and didn’t do the work to find a defense. The client wasted valuable time and money as the prior lawyer/pros. Didn’t do any work for 2 years. He just let it sit in his office. This isn’t the case with every prosecutor as some are very hard working. But don’t let it fool you into thinking they are connected with the judges and know it all. It’s just a catchphrase that they use to get more money out of your pocket.